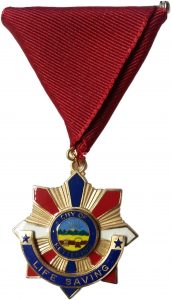 The Kettering Fire Department’s Life Saving Award is a prestigious and incredible honor awarded to active duty personnel whose direct actions save the life of person whose heart has stopped beating and shows no signs of life. This award is only achieved when the patient who was clinically deceased is not only resuscitated and regains life sustaining functions, but moreover is able to make a full recovery and resume normal life activities. It is one of the most rewarding accomplishments any member of this organization can make in the course of their career and to know that their actions contributed to saving the life of another human being. To understand the significance of the last statement, the individual that is saved must be discharged from the hospital and resume normal life activities.

On the morning of March 17, 2018, our dispatch center received a call for a person in cardiac arrest. The dispatcher notified crews in just 33 seconds, and Company 36 arrived on scene in less than 4 minutes from the time of the call.

On scene, crews found an unresponsive female on the floor with a family friend performing CPR. The crews from Medic and Engine 36 quickly assessed the situation and positioned the Lucas Compression device to deliver high-quality CPR. They then began advanced cardiac life support procedures. Shortly thereafter, crews detected a pulse, and the patient began attempting to breathe on her own. This crew had the patient at the hospital, with a pulse and a fighting chance for survival in just a little over 30 minutes from the time the call was made to 911. After just two short weeks, the patient was released from the hospital and sent home.

This call is a prime example of how our community-based CPR program is a vital link in the chain of survival. If the family friend had not started CPR immediately, the outcome for this patient could have been considerably different. Thanks to a quick acting friend and the actions of these firefighters, this citizen’s life was saved. Well done and congratulations!

On October 16, 2018, at approximately 11:15 a.m. our dispatch center received a call for a woman in cardiac arrest. Company 36 was notified and dispatched within 25 seconds of receiving the call. Crews responded and were on scene in just 3 minutes and 25 seconds. Upon arrival, crews found a female patient in cardiac arrest with CPR being performed by a family member. KFD crews took over CPR and began advanced life-saving interventions. These crews worked hard to save her life by performing high quality CPR, giving several rounds of advanced cardiac drug therapy, and using cardiac defibrillation to place her heart into a normal rhythm. Once the patient was stabilized, she was transported to the hospital where she arrived with a second chance at survival.

This was a complicated full arrest which required several rounds of cardiac drugs and four defibrillator shocks before her heart returned to a normal rhythm. This event is a perfect example of how the chain of survival works. The early activation of the 911 system; the importance of early, high-quality CPR; cardiac defibrillation; and advanced life support all played key roles in ensuring the positive outcome for this patient. Congratulations on a job well done!

On November 1, 2018, at approximately 10:30 p.m. our dispatch center received a call for a person experiencing severe chest pain with difficulty breathing. The dispatcher notified crews in just 36 seconds, and Company 36 responded to the call. Upon arrival, crews found an unresponsive male patient with a bluish tint around his lips and face. He was on his back in his bed which was located in a small, cramped bedroom. He was found to have inadequate agonal breathing and no pulse.

Company 36 crews quickly worked together to move the patient out of the small bedroom and into the medic, which is a much more controlled environment in which to work. Once in the medic, crews initiated high quality CPR with the Lucas external compression device and began advanced life support procedures utilizing the cardiac monitor, the cardiac defibrillator, endotracheal intubation, and cardiac drug therapy.

After several rounds of cardiac shocks and advanced drug therapy, the patient’s pulse returned, and he started to breathe on his own. Stabilizing medications and oxygen therapy were given while en route to the hospital.

Several weeks later, this patient was released from the hospital and sent home after having fully recovered from his near-death experience.

The quick decision making and essential treatment given by these crews saved this patient’s life. Calls like this show why it’s so important for Kettering Fire Department personnel to train extensively and prepare for the unexpected. Congratulations and well done!

On December 11, 2018, at approximately 9:40 a.m., our dispatch center received a call for a female in cardiac arrest. The Dispatcher notified Engine 37 and Medic 32 within 43 seconds and they responded with urgency.

Upon arrival, Engine 37 crew found the facility’s staff performing CPR on a female in cardiac arrest. The staff had placed their AED on the patient and had already delivered two shocks prior to KFD’s arrival. E37 immediately assessed the patient and took over CPR efforts. M32 arrived shortly after the engine and placed the Lucas External Compression device and began advanced cardiac life support procedures.

Shortly after the first rounds of ALS drug therapy, the patient’s heart began to beat on its own. The patient was loaded onto the cot and transported to the hospital for further treatment and stabilization.

This is a clear example of the importance of immediate bystander CPR and the quick use of the AED. That coupled with the quick actions by KFD crews on scene helped to save this woman’s life. Its calls like these that show how hours of training and preparation are vital to the Kettering Fire Department and the citizens of Kettering. Well done, gentlemen, and congratulations!