What is Carbon Monoxide?

Carbon Monoxide (CO) is called the invisible killer because the gas cannot be seen or smelled. CO is created when fuels (such as gasoline, wood, coal, natural gas, propane, oil, and methane) burn incompletely. In the home, heating and cooking equipment that burn fuel are potential sources of CO. Vehicles or generators running in an attached garage or near an open window can also produce dangerous levels of CO.

The dangers of CO exposure depend on a number of variables, including the victim’s health and activity level. Infants, pregnant women, and people with physical conditions that limit their body’s ability to use oxygen (i.e. emphysema, asthma, heart disease) can be more severely affected by lower concentrations of CO than healthy adults would be. A person can be poisoned by a small amount of CO over a longer period of time or by a large amount of CO over a shorter amount of time.

Your home should have a CO alarm if:

What do I need to know about Carbon Monoxide alarms?

Why do I need them? 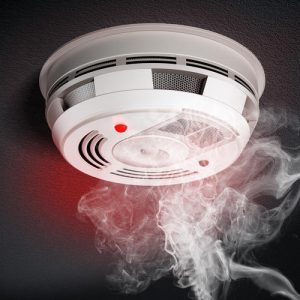 Modern home furnishings cause home fires to burn hotter and faster while creating highly toxic smoke. Two thirds of home fire deaths happen in homes with no smoke alarms or no working smoke alarms. Smoke alarms are needed to ensure that everyone in your home will have enough time to exit safely if a fire starts.

Smoke alarms should be installed in the following locations:

For the best protection, it is recommended to have both ionization and photoelectric smoke alarms in your home.

Replace smoke alarms in your home every 10 years.

Test each smoke alarm monthly and replace the battery at least once per year.