The City of Kettering joins the entire Kettering community in mourning the loss of Keith Thompson, a beloved leader of our Kettering Police Department and former member of Kettering City Council.

Keith Thompson was a dedicated public servant, selflessly giving 55 years of support and dedication to the best interests of the Kettering community. 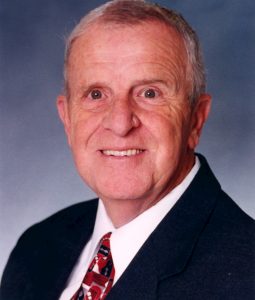 In 1956, Keith Thompson began his career at the Kettering Police Department moving through the ranks from Patrol Officer to Captain/Assistant Police Chief, serving and protecting our citizens until his retirement in 1983.  Keith was elected to the Kettering City Council in the fall of 1983 and served the residents of District 1 for 28 years, serving as Vice Mayor in 1990 – 1991, and again in 1998 – 1999.  He retired from Kettering City Council in 2011.

Many of the programs and services Kettering residents enjoy today were initiated while Mr. Thompson served on City Council.

During his tenure, Keith Thompson actively participated in local, state and national organizations such as the Kettering Volunteer Firefighter Dependents Fund Board; Montgomery County Water/Wastewater Commission; the National League of Cities, Public Safety & Crime Prevention Policy Committee; the Ohio Municipal League, serving as their President in 2008; and in 2007, he received the Kiwanis Kettering” Citizen of the Year” Award.

Throughout his public service career, Keith Thompson earned the respect of other civic leaders and the affection of a host of area residents who are proud to call him “friend.”  He will be dearly missed and our thoughts are with the entire Thompson family.